Breaking the Bias with Sheila Johnson

International Women’s Day is a day to celebrate the exceptional strengths and endurance of women throughout years of gender inequality, and their remarkable achievements despite what they are up against. The theme this year is #breakthebias and the aim is to shine a light on women in the workplace.
In today’s 21st Century, where we have extraordinary women succeeding in respected roles across all industries, it’s hard to believe that just a century ago, women didn’t work outside the home and had very limited opportunities available to them. Many barriers they faced were lifted after World War II, where women proved themselves to be undeniably valuable by undertaking what was believed as “men’s work” and doing it well! Gradually, their prospects began to open up.

One woman who found herself in such a position was Sheila Johnson, a retired RAF nurse who joined us at our Cwmbran Care Home, Thistle Court in 2021. Today, we take a look at how Sheila defied the stereotypical views of the women of her generation and how her caring nature led her on the journey of a lifetime.

Sheila was born in 1938 and grew up in Caerphilly, a Welsh town famous for its castle, cheese, and for being the birthplace of beloved British comedian Tommy Cooper. She was an adventurous child and spent her early years playing alongside her two little brothers, Norman and Christopher and treasured their trips to Barry Island and playing at the seaside. 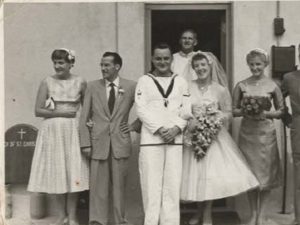 Sheila grew into a young, caring woman with big ambition and an adventurous streak that would see her fly far beyond her Welsh beginnings. At 18, Sheila left the family who was now in Cardiff, to join the RAF and upon graduating she was deployed to Singapore and began a fulfilling career as a registered RAF nurse. Whilst Sheila was out there providing nursing care to those in need, there was a certain handsome young officer in the Royal Navy, Michael Aubrey, who would catch her eye and also, capture her heart. At just 20 years old, Sheila was married in a ceremony in Singapore, and soon after their son, Stephen arrived.

While many women would be expected to leave their careers once reaching motherhood to return to more traditional housewife roles, Sheila remained adamant her work was important and determined to continue her work in the military, she balanced her life as a mother to Stephen, who lived primarily with his grandparent’s, with her job, which allowed for Sheila to experience equal opportunities as her husband.

As her time in Singapore came to an end, Sheila joined the Army and began a career that would span two decades of incredible humanitarian work, joining both the United Nations who put tremendous effort into establishing global peacekeeping operations and the almighty NATO peacekeeping force during the Cyprus conflict (UNFICYP).

A significant moment in Sheila’s career arrived in 1969 when she attended an event at Caernarfon Castle as an officer. It was, of course, the investiture of Prince Charles, where the world watched on thei 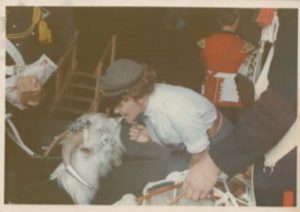 r black and white boxes as Queen Elizabeth II invested her son as the Prince of Wales.

Sheila led her team at the Castle and even had the honour of meeting the young Prince himself, who was largely affected by his time spent in Wales. During a powerful moment in his speech that he had written himself, he declared in Welsh, “One thing I am clear about and it is that Wales needs to look forward without forsaking the traditions and essential aspects of her past.” The Prince contending that Wales should maintain her own national identity was received well by the Welsh, and Sheila, who was proud to have witnessed an immensely historical event.

Sheila retired as Captain in the Queens Alexander Nursing Corps in 1981, after over 20 years of service, spending her life caring for those who needed it the most and working with the most renowned humanitarian organizations that exist to make the world a better place. Like millions of other women that come before and after her, she has contributed towards breaking the bias that women are the weaker sex.

Sheila has thrown herself into challenges her whole life, challenges she met with courage. And as time went on, a different sort of challenge would arise 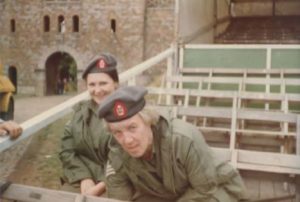 In the late 1980s, Sheila caught meningitis that left her profoundly deaf, and more recently she was diagnosed with a Dementia and has been living with us at Thistle Court for over a year now, where we have been getting to know this fiercely independent Welsh woman who refuses to let anything beat her.

Sheila now enjoys spending much of her time with her passion for reading and has daily magazines delivered to her personally, which she spends hours immersed in. Thistle Court has created an environment where Sheila can remain living as independent as ever. As well as reading, she is heavily involved with The Church of England community and enjoys cooking and potting plants out in the garden during warmer days. 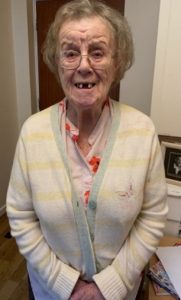 . Understanding life histories is crucial to understanding people’s identities. We are largely our own experiences, and they greatly shape the people we are and who we become. Stories are what connect us, stories are what we are all made up of. Today, the Thistle family celebrate not just Sheila, and the women here we support, but all women.